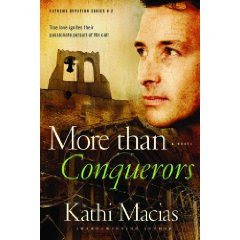 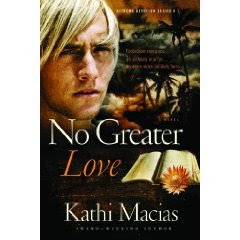 November 8 is International Day of Prayer for the Persecuted Church around the world. With that in mind, I’d like to encourage you to join us in prayer for our brothers and sisters who pay a huge price for choosing to follow Jesus. I’d also like to whet your appetite for my new Extreme Devotion fiction series, four novels that begin releasing in April 2010. Here are the prologues and covers to the first two books. I’ll put up the others as soon as I have them. For now, these two are available for pre-order on Amazon.
Book One of the Series: NO GREATER LOVE: Prologue

1989 was not a good year to fall in love—at least not in South Africa, and certainly not with a white man. Chioma had fought it with every ounce of her being, but there it was, literally, in black and white.
Chioma hated whites, and that included Andrew—except that Chioma also loved him. And that made her dilemma even worse.
But at least she had never admitted to him—or anyone else—how she felt, nor did she have any intention of doing so. And yet, the way he looked at her, she could not help but wonder if he knew—and if he felt the same about her.
It was ridiculous, of course, even to think such a thing about a white man, but if it were true, she could only hope he would never be foolish enough to say anything about his feelings—to her or anyone else. Not only would a relationship between them be nearly impossible, but it would be dangerous as well. And Chioma already had enough danger in her life; she certainly did not need to look for more.
Book Two of the Series: MORE THAN CONQUERORS: Prologue
Pastor Hector Manolo Rodriguez sighed with relief, as his dilapidated, once-blue station wagon crawled and chugged through the final inches of the hour-long event known as a border crossing. The international station between San Diego and Tijuana saw the heaviest traffic of any crossing in the world, with about 300,000 people making the trek every day—some to work, some to play, some to shop or visit relatives, and some to conduct illegal activities of various kinds. For Hector, it was strictly a venture of love, one he made regularly and yet was relieved when it was over.
It wasn’t that Hector didn’t appreciate the beauty and modern conveniences of his sister city to the north, but he preferred the slower, quieter pace of his humble home on the outskirts of Tijuana, even now in 2008 when crime increasingly encroached on the peace of their existence. He had lived there his entire thirty-eight years, the middle child in a family of nine offspring, and had later married the beautiful Mariana Lopez, who had grown up right next door to him. That she had even noticed Hector never ceased to amaze him, and that she had agreed to marry him was nothing short of a miracle. Now, still living in the same neighborhood where they grew up, they did their best to feed and clothe the three children God had given them, as well as minister to the fifty or so members of their beloved Casa de Dios congregation. To supplement their income, Hector worked part-time in his younger brother Jorge’s shoe repair shop. Though their financial situation did not allow for luxuries, it did provide a roof over their heads and food in their bellies.
It was a good life, Hector thought, as he coached and prayed the twenty-five year old car through the undisciplined crush of traffic on Avenida Revolucion, the main drag in this burgeoning city of nearly one and a half-million people. As always, Hector was anxious to break away from the city’s hub and escape to a quieter, more navigable thoroughfare. Though the quality of the roads would deteriorate the farther out he went, he would be glad to leave the hustle and bustle of the Tijuana tourism trade behind.
He would also be glad to leave behind the sadness that seemed to cling to him each time he crossed the border. And yet he knew his need to continue making the trip would end far too soon….
Then, of course, there was the situation in Chiapas, which seemed to grow more desperate and dangerous by the day. And his sixty-three year old mother, Virginia Correo Rodriguez, was living right outside San Juan Chamula, right in the middle of it all.
By Kathi Macias|2016-12-20T19:29:44+00:00November 2nd, 2009|Easy Writer, Extreme Devotion, fiction series, International Day of Prayer, Kathi Macias, Persecuted Church|0 Comments