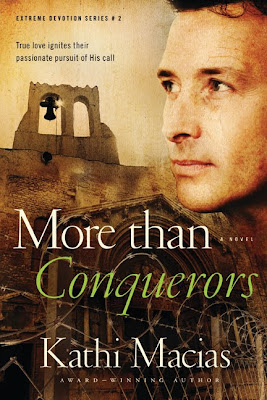 Okay, beloved readers, as promised, here is Twin #2, More than Conquerors. This book is set in Mexico, partially in the border town of Tijuana, but also in the Mayan culture of San Juan Chamula in Southern Mexico, where outsiders (particularly “Evangelicos”) are most unwelcome.

Take a look at what people are saying about Twin #2:

“As readers follow Kathi Macias’ characters through intense spiritual warfare, set against the backdrop of the Mayan culture in old Mexico, they will find themselves encouraged to trust the working of a sovereign and good God in their own lives, and to follow His will–wherever it leads.”–James H. Pence, coauthor of Terror by Night

“Once again, author Kathi Macias delivers a powerful novel that explores the tensions faced by those who seek to honor Christ but who live in a world marked by violence and despair…. From first page to last, More than Conquerors reminds us that even when circumstances appear to be at their most desperate, God is at work in and through all things.”–Shelly Beach, Christy Award-winning author of Hallie’s Heart and Morningsong

“Kathi Macias writes from the heart of faith and hope. In More than Conquerors, she weaves together the lives and faith of people who meet not by chance, but by divine appointment–and at a cost. She reminds us we all have a part to play in the arena of faith, and that God sometimes calls us to places that require us to count fully on Him in order to be more than conquerors. Curl up with this book and let Kathi Macias take you to that place.”–Bonnie Grove, author of Talking to the Dead