Skip to content
Previous Next
“Love Me Tender” Guest Interview 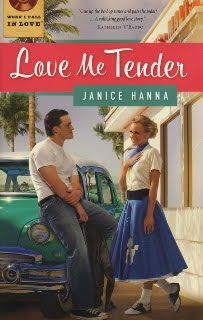 Welcome, readers! This is Sunset Sam, columnist for Hollywood Heartthrob magazine, here to interview several characters from LOVE ME TENDER, a new book by author Janice Hanna Thompson. I read the book in preparation for this interview and had a hip-hip hoppin’, be-be-boppin’ time reading about the characters down at Sweet Sal’s Soda Shoppe in Laguna Beach. I’ve been to Sweet Sal’s many times, of course. Everyone in Hollywood knows it’s all the rage. Where else can you get a big, thick cheeseburger, hot, salty fries and the thickest chocolate malts in the country? Now that I’ve enticed you with the food, let’s have a little chat with some of the key players in our story. We’ll start with Debbie Carmichael, daughter of the owners of Sweet Sal’s.

Debbie, could you tell us a little about what your day-to-day life is like?
Most of the girls my age are in college, but I decided to stay in Laguna Beach and help my parents out at our family run soda shop. I have the best life ever! I live across the street from the Pacific Ocean, and love spending time at the cliffs, watching the waves lap the shore. When I’m at the soda shop, the jukebox is always playing. I’m gaga over Elvis’s new song, “Love Me Tender.” It’s all the rage with teen girls right now. Of course, I’m also head over heels for Bobby Conrad, but don’t tell my friends, okay? They think I’m more mature than most of the other teen girls who hang out Sweet Sal’s. Of course, I’m a little distracted by that new guy, Johnny Hartman. He’s so sweet and handsome, and I hear he’s a great singer, too!

Johnny, I read in another article that you came all the way from Topeka Kansas to Hollywood to make it big. How does Hollywood compare to Topeka?
There’s really no way to compare Topeka to Los Angeles. People out here (in California) are more up on current styles, the hottest tunes and the hippest actors and actresses. Back home, folks are so grounded. That isn’t always the case here in L.A. I hope I don’t sound too stuck up when I say that back in Topeka, I was a big fish in a small pond. And because my dad’s a pastor, I had plenty of opportunities to sing in church. But out here in L.A. no one even knows who I am. My agent, Jim Jangles, is working hard to get me a gig on television. I’m auditioning for Arthur Godfrey’s Talent Scouts soon. Say a little prayer for me!

Bobby, I understand you were slotted to sing at the fundraiser at Sweet Sal’s Soda Shoppe, but had to cancel. Could you explain your sudden departure?
Yes, I was scheduled to sing at the fundraiser, but just got word that I’ll be filming my new movie that same weekend. I was really disappointed to have to tell the Carmichaels the news, but hopefully they understand. I think it’s going to be okay, because my agent, Jim Jangles, is sending his latest prodigy—a kid from Topeka named Johnny Hartman—in my place. I hear he’s quite a singer.

Sal, could you tell our readers about some of the Hollywood stars you’ve met over the years?
First of all, thanks for including me in this interview! It’s been decades since I was a teen, but I still secretly read Hollywood Heartthrob magazine. (Shh! Don’t tell my husband, Frankie, or my daughter, Debbie!) I’m blessed to be the co-owner of Sweet Sal’s Soda Shoppe in Laguna Beach, and I’ve met a lot of stars who’ve come through on their way to places like Dana Point and San Diego. Here’s a list of some of my favorites: Doris Day, Gregory Peck, Frank Sinatra, Audrey Hepburn, Lucille Ball, Desi Arnaz, Ozzie and Harriet. There are dozens more, of course. I want to personally invite all of your readers to stop by Sweet Sal’s Soda Shoppe so that they can see the photos on our walls! And while you’re here, why not enjoy a creamy chocolate malt?

Debbie, a little birdie told me that you and the other girls in Laguna Beach are gaga over Elvis, Pat Boone and Bobby Conrad. Now that you’ve gotten to know (and love) Johnny Hartman, what would you say sets him apart from the other great singers you’ve known?
Oh, no doubt about it. . .Johnny isn’t just a great singer, he’s got a heart of gold. I especially love his strong faith. Unlike so many of the other singers in town, he doesn’t put himself first. With Johnny, it’s God first. . .all the way! And when he sings. . .man! That voice! It’s a smooth as velvet. (And it doesn’t hurt that he’s so dreamy! Talk about handsome!)

Johnny, you’ve been asked to fill in for Bobby Conrad at the Laguna Beach fundraiser. Can you tell us how you’re feeling as you look forward to the big day?
I don’t mind admitting I’m a little nervous. Who wouldn’t be? Thousands of girls from Orange County and beyond are looking forward to seeing Bobby Conrad in person. Now I’ve been asked to fill in for him. I’ll be lucky if they don’t boo me off the stage or toss rotten tomatoes at me! Hopefully my new love song—the one I wrote for the gorgeous Debbie Carmichael—will win them over. I hope so, anyway!

Bobby, many Christians have a hard time hanging onto their faith once they achieve stardom. You seem so grounded. What’s your secret?
I always try to honor God in everything I do—whether it’s movies or songs for the radio. There’s a verse that I love, and it’s one I try to live by: “But seek ye first the kingdom of God, and his righteousness; and all these things shall be added unto you.” The way I look at it, if I make a choice to put God first, He’s going to bless me above and beyond anything I could ever ask for, anyway. Even if He didn’t bless me, though, I would still serve Him. It’s really the only way to live a fulfilling life. (And trust me when I say that people out here in L.A. are looking for ways to live a fulfilling life!)

Sal, we were sorry to hear about your husband’s health problems. How is he doing now?
Praise the Lord, Frankie seems to be doing a little better. His heart attack several months ago really shook us up. And we got behind on the mortgage, which has made me a little nervous. Still, I choose to trust God. And now that everyone in town is banding together to put on the fundraiser to save the soda shop, I’m feeling more hopeful than ever!

Debbie, is there anything you’d like Hollywood Heartthrob readers to know as we end this interview?
Yes, I would like people to know that it is possible to live in Hollywood—to be a big star, even—and still be a person of faith. I’ve witnessed it in Bobby Conrad’s life, and in Johnny’s, too. I’d also like to share that putting your trust in God is really the only way to go. Some problems are just too big for us to handle on our own. When my dad got really sick, I made up my mind to try to “fix” the situation. What I’ve learned is this—only God can truly “fix” anything. And trust me when I say that His “fix” is far greater than anything we could ever dream up!
Thanks so much, folks! It’s been a great interview.
Well, there you have it, Hollywood Heartthrob fans. This is Sunset Sam, signing off for this week. See you next time!

Book can be purchased at www.janicehannathompson.com or at www.amazon.com.

GIVEAWAY INFO: Janice Hanna Thompson is hosting a giveaway on her Facebook page (http://www.facebook.com/jhannathompson). To enter, leave a comment on her page with the name of your favorite ‘50s star (movies or music) and explain why you liked him/her. The drawing to win the Be-Boppin’ ‘50s Basket (filled with great ‘50s memorabilia) will take place on the weekend of October 29th – 31st. Why? Because that’s the same weekend Janice is directing a local (Houston) production of JOHNNY BE GOOD the musical comedy that served as inspiration for LOVE ME TENDER.
To visit Janice’s webpage, go here: www.janicehannathompson.