Skip to content
Previous Next
Prologue to People of the Book 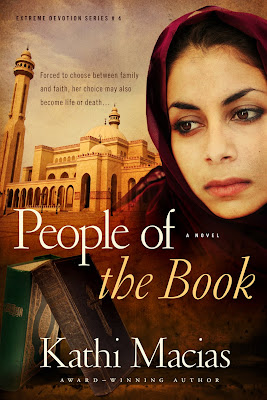 Okay, by popular request I’m adding the Prologue to People of the Book. Here you go!

Eighteen-year-old Farah Mohammed Al Otaibi lay bruised and bloody on the floor beside her bed. The image of her soft mattress floated in and out of her consciousness, but she had no strength to drag herself from her current position. Even the slightest movement brought stabs of excruciating pain, so she tried to remember to keep her breathing shallow and her body still.
How long had she been here? Hours, certainly. Days? She couldn’t be sure. Her father and brother had covered the windows with heavy, dark cloth, blocking out any light that might help her keep track of time.
Hunger wasn’t an issue, for who could think of food when the pain was so intense? But thirst? Oh, how she longed for just a sip of cool water! Surely her mother would sneak in soon and bring her some. She had always taken care of her before—

The memory was back, though she tried desperately to block it out. Impossible. She could never forget that moment in time, for it was the dividing line between the before and after of her life. Before the tragedy that led to her brother’s discovery. Before her father had flown into a rage over what he considered his daughter’s betrayal and treachery. Before they had threatened to kill her in order to preserve the family’s honor. Before her mother had tried to intervene…
Hot tears pricked the back of Farah’s eyelids, as the vision of her mother’s face before—and after—swam in front of her eyes. The pain in her heart at that moment far exceeded anything she felt in her body. Then suddenly, inexplicably, the meaning of her name—Farah, joy and cheerfulness—burst into her consciousness. Despite her agony and sorrow, Farah was unable to hold back the brief burst of laughter that exploded from her aching chest. How absurd that her parents had given her a name that implied happiness, and yet she now wondered if she had ever truly understood or experienced any of it in her not quite nineteen years of life.

But then she had met Isa, and everything—both good and bad—had changed forever….