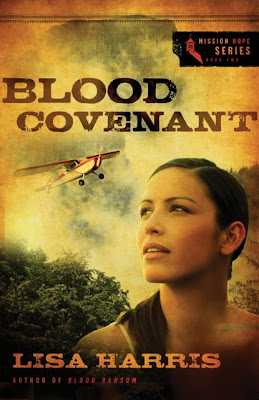 One of the things I love about traveling and living in different countries is that it has widened my worldview and given me a greater understanding into the lives of other people. Because of this, I’m so thankful for the chance to share some of what I have discovered–the people, culture, and setting–through a fictional story.

In February, Zondervan will release book two in my Mission Hope series, Blood Covenant. While the first book dealt with the very real issue of human trafficking, the second is another fast-paced suspense novel set primarily in a refugee camp.

As I started doing the research for Blood Covenant, though, I began to wonder if my readers would find the plot unbelievable. Surely the story of a humanitarian crisis dealing with so many issues—from cholera to measles to rebels—could only be fabricated and would never happen in today’s world. Yet as I read story after story of individual refugees I found myself weeping with them over what they experienced. And I realized that, if anything, I had sanitized my story to make it more believable, because the facts tell another story.

According to the international aid organization Doctors Without Borders, there are forty-two million people in the world who have been displaced by war and violence. You read it right. Forty-two million.

So while the story behind Blood Covenant, including the setting, is fictional, the issue of those being forced to leave their homes with nothing more than the clothes on their back is very real. But in spite of this tragedy, I didn’t want to stop the story there. Drawing from my own experiences across Africa over the past twenty years I tell a story that goes beyond the adversities to give readers a message of hope.

“From the explosive first pages, Lisa Harris weaves a tale of heart-stopping suspense and adventure with her second book in the Mission Hope Series.

When fighting erupts between government forces and renegade Ghost Soldiers deep within the Republic of Dhambizao, thousands are forced to leave their homes. Dr. Paige Ryan, who works with Volunteers of Hope International, is sent to lead a team to set up a refugee transit site—where the immediate needs for shelter, water, sanitation, and food are critical. Nick Gilbert, a bush pilot for Compassion Air, joins the team to help fly supplies in and out of the area.

With the refugee camp already experiencing overcrowding, raids, and uprisings, a group of American mountain climbers is attacked by the Ghost Soldiers. Paige’s medical team responds immediately, rescuing survivors and taking them into the camp. When it’s discovered that one of the trekkers is carrying an infectious disease, the harrowing conditions of the camp are forgotten.

In desperate need of vaccines and the Ghost Soldiers blocking the only road out until their demands for amnesty are met, it won’t be long before the disease is out of control … and there is nowhere to run.”

For more about life in Africa, stop by my blog, http://myblogintheheartofafrica.blogspot.comr or my website www.lisaharriswrites.com.