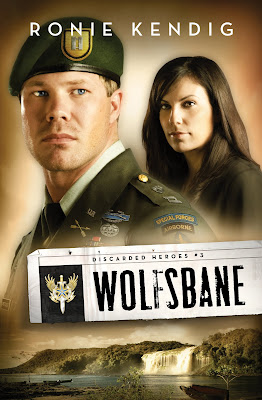 A female demolitions who unwittingly holds a lethal secret. . .

A former Green Beret grappling with terrifying memories of a mission gone bad. . .

And the jungle that threatens to swallow them whole.

In Venezuela, Danielle Roark and her Army Corps of Engineers team is captured. After six months of captivity, Dani escapes, only to end up charged with espionage and forced to return to the jungle to prove that a nuclear facility exists. On the mission, she is abandoned by God and country. Will she live long enough to make those responsible pay? Haunted by memories of a mission gone bad, former Green Beret Canyon Metcalfe wrestles with his developing feelings for the feisty senator’s daughter. Setting aside his misgivings, he and Nightshade take the mission to help Dani unravel her lethal secrets. Separated from the team leaves Dani and Canyon vulnerable—and captured. After he is rescued, Canyon discovers Dani has been left behind. Livid, he sacrifices everything—including his role with Nightshade—to find Dani. Can Dani and Canyon fight the nightmare armed with only forgiveness and raw courage? Or will they lose their lives, minds, and each other?

The author’s military background shines through in vivid detail…Kendig pulls out all the stops with page-turning action, adventure and danger. Book three in the Discarded Heroes series can pretty much stand alone. ~~Romantic Times (Chandra McNeil)

Ronie Kendig serves up a mix of machinegun-fast action, touching romance, and more twists than a coil of a detonator wire. Get a good grip on the edge of your seat before you start reading! ~Rick Acker, author of When the Devil Whistles and Dead Man’s Rule

Non-stop, fast-paced, machine gun type action that will leave you exhausted–and yearning for more. Don’t even try to put the book down because you’ll find yourself drawn right back, unable to do or think about anything else until you reach the end. Kendig has created realistic, imperfect characters to cheer for and cry with as they struggle to find God and do the right thing. A definite keeper for your read-again shelf.” ~Lynette Eason – best-selling author of Too Close to Home and Don’t Look Back

WHAT REVIEWERS ARE SAYING:

In a book loaded with action, great characters, and high emotion, there are some beautiful reminders of God. From His plans for an individual’s life to His amazing forgiveness, there are several gentle reminders of God’s presence in the midst of the storm.

This series has excelled in reminding the reader of many fundamental spiritual truths while providing hours of fast-paced entertainment. Most of all it has highlighted the soldiers who have left the battlefield, but are still haunted by the war. For those that can handle emotion, passion, and raw intensity, this is a fantastic series and one I highly recommend. ~~Melissa Willis The Christian Manifesto

This is the most amazing book I have read in a long time. It has a high intensity, quick moving plot that doesn’t sacrifice depth of character. Descriptive settings cause the reader to feel like they are living the adventure alongside the characters. The characters, though unique, feel true to life and experience struggles and sins that aren’t solved in the blink of an eye.

Just when you think she’s packed everything into the plot, Ronie Kendig adds another layer. This book is worthy of 5+ stars. It has just the right balance of adventure, suspense, and romance.

If you only read one book this year, this is the one I recommend. ~~Kristen Lowery Read Great Fiction

Every second of this book took me on a journey. From the rain-soaked jungles to the courtroom to crazy dangerous secret missions to almost as dangerous family get togethers, each step of Dani and Canyon”s is a challenge that you get to experience with them. The best thing about Wolfsbane are these “real” characters who make real-life mistakes. Sure, most of us aren”t a part of a covert ops team but we are exposed to some of the same difficult choices and crossroads on our faith walks that Dani and Canyon faced.

Wolfsbane is by far my favorite of the series. I stand in awe of these incredible books and the uber-talented Ronie Kendig. If there are only a few books that you add to your “to-read” list this year make sure one of them is Wolfsbane! You won”t regret it. Trust me. ~~Renee Chaw Black ‘n Gold Girl’s Book Spot

Ronie Kendig grew up an Army brat and married a veteran. Together, she and her husband have four children and three dogs. She has a BS in Psychology, speaks to various groups, volunteers with the American Christian Fiction Writers (ACFW), and mentors new writers. Rapid-Fire Fiction, her brand, is exemplified through her novels Dead Reckoning, a spy thriller, and the military thriller series, The Discarded Heroes, which includes Nightshade (Retailer’s Choice Award Finalist), Digitalis, Wolfsbane, and Firethorn (January 2012). Ronie can be found at www.roniekendig.com or www.discardedheroes.com