Skip to content
Previous Next
A lovely fireside read! 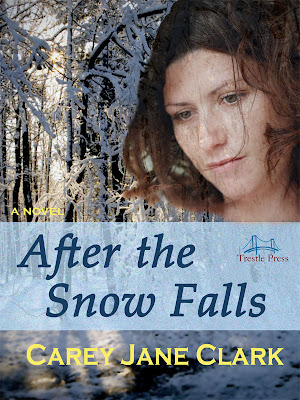 I’m excited about Carey Jane Clark’s new release, After the Snow Falls, not just because it’s a great story but also because she’s a great new writer. Watch for more books from this exciting new voice in Christian fiction in the near future! Meanwhile, here’s what the book is all about:
In the middle of a soccer drill, in an awful, awkward moment, Celia Bennett’s eight-year-old son Caleb lands on his face and chest in the grass. The diagnosis blindsides her, bringing her face-to-face with every parent’s worst nightmare.Desperate to save her son’s life, Celia pursues a cure through alternative medicine, but her quest ends in frustration and disappointment. Facing despair, hope walks in on the most unlikely set of legs, when her father returns after a 30-year absence. Can she release pain to embrace hope? Will it make a difference, or is it too late?Carey Jane Clark writes to instill courage, hope and conviction in her audience. She has authored several articles for Canadian publications and has ghostwritten a devotional for teens. She has been writing in one form or another for more than twenty years. Her writing in After the Snow Falls has been compared to that of Karen Kingsbury and Jodi Picoult. Carey shares the adventure of her life with her husband Brian and three children, whom she homeschools. She blogs about their experiences homeschooling and as expats in China at www.careyjaneclark.com/enCouragement and http://www.holdthemsg.com/.
Order it at www.afterthesnowfalls.com/buy
By Kathi Macias|2016-12-20T19:28:48+00:00December 16th, 2011|After the Snow Falls, Carey Jane Clark, Easy Writer|1 Comment