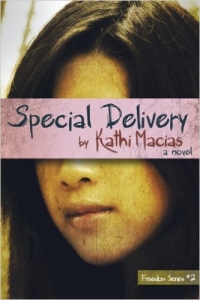 In book two of the “Freedom” series, readers find Mara fighting against her attraction to Bible college student Jonathan Flannery even while wrestling with risking her own precarious safety to become involved in the rescue of another girl who is pregnant and desperately wants to escape her captors and save her own life, as well as her child’s. Halfway around the world in a brothel in Thailand, a young girl is rescued with the promise of being reunited with her younger sister who was adopted by an interracial couple in the States, friends of Jonathan’s family. Meanwhile, Jefe—Mara’s uncle, who held her as a sex slave in his brothel in San Diego for years—seeks revenge for Mara’s testimony that put him behind bars for life. Will his underworld connections be successful in kidnapping and killing the girl who believes she has finally won her freedom?