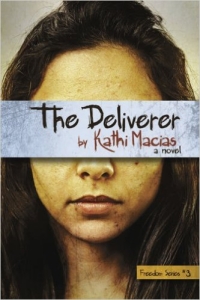 In The Deliverer, Mara has to make some major choices: (1) whether to trust her feelings for Jonathan, despite the fact that she fears men in general; (2) whether to risk returning to Mexico to find her family, the very ones who sold her into slavery when she was just a child; (3) whether to receive God’s forgiveness and then offer that forgiveness to those who have so viciously hurt and betrayed her. Lawan is also deeply involved in this final book, as it opens with her winging her way from Thailand and all that is familiar to come and live with the family who adopted her younger sister, Anna. Though still a child herself, Lawan has survived nearly three years in a brothel and feels much shame as a result. Will she be able to bond with her new family and allow God to heal the losses and pain she has sustained in recent years?

Jonathan, too, has much to deal with—primarily his feelings for Mara. Can he, a Bible college student, establish a deep and meaningful relationship with a young woman who has spent the majority of her life as a sex slave? At New Hope Digital (NewHopeDigital.com) you can find study questions for each book in this series and an ideas and resources list to help educate readers and enable them to apply what they’ve learned and become actively involved in this massive and ongoing human tragedy—trafficking in persons.